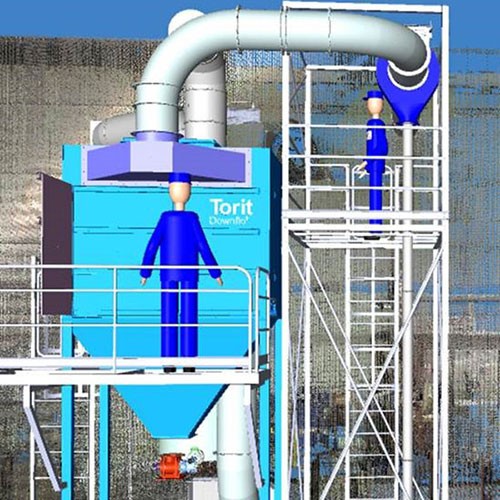 In many traditional industrial plants, the extraction systems grow over the years, as attempts are made again and again to adapt the systems to changing requirements. A situation like that happens quite often. IMEX Austria was recently faced with a system just like this, and was supposed to offer a new modern dust extraction system instead of the old one. In the course of the needs analysis, however, technical experts of IMEX also looked at the overall system, including the associated pipelines. IMEX wanted to ensure that the entire plant complied with the current state of the art and all applicable requirements regarding safety and production standards. 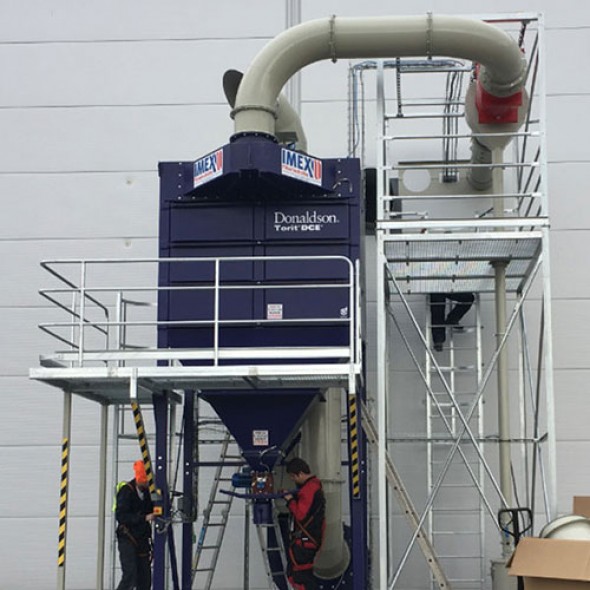 Experience shows that a dust extraction system is the most important component to ensure cleaner air in factory halls. However, if dust-laden air is not transported efficiently, operations risk high energy costs, unsafe conditions in the plant, even fire and explosion, and, reduced overall system efficiency.
Pipelines are used to transport dust particles from the collection point to the dust extraction system. They must be dimensioned correctly to create an ideal transport speed so that solids cannot settle and cause deposits or clogging of the pipes. In extreme cases, the weight of deposits has already caused pipeline sections to collapse causing severe damage. Especially with combustible and explosive dusts, insufficient transport speed could therefore pose a very high risk. 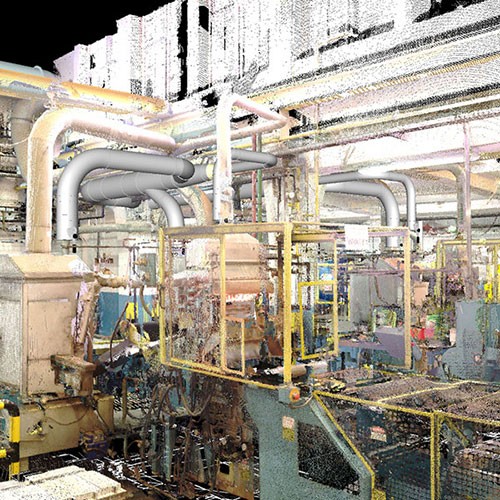 The design of pipelines is based on two important variables: the particles that are collected and the volume of air that is moved. The heavier the solids, the higher the required air speed. How do you achieve a higher air speed? With more air or with a smaller diameter - everything else is physics. But anyone who now thinks that it is better to go too fast than too slow is unfortunately mistaken.
If, for example, abrasive dusts are transported too fast, this can lead to severe wear of the pipelines. Other negative effects resulting from excessive pipe velocities are e.g. noise. Furthermore, each increase in speed requires exponentially more energy, larger and more powerful fans, and thus incurs significant costs.
Therefore, the correct transport speed in the entire pipeline network is of crucial importance.

In the present case, it was also necessary to calculate several extraction stations, which are not always in use all at the same time. The task was to design an extraction system for the customer that has several extraction points, some of which have to work simultaneously, but often also independently of each other (mixing plants where extraction is only necessary during filling). As mentioned before, this also involved explosive dust, which meant that the exact transport speed towards the filter was additionally of key importance.
The experts of the IMEX Filtertechnik Group from Austria and Hungary created a matrix in cooperation with the customer based on the simultaneity factors, in order to determine which extraction points are allowed to be open at the same time and which are not. Based on this grouping, the appropriate pipe and ventilation dimensions were then selected. As a result not a central collector line, but several parallel pipelines were created.

The new planning of pipelines in existing industrial plants is often very likely to develop into one of the greatest challenges. On the one hand, unnecessary meters, bends and nodes should be avoided in order to minimize costs, as these cause high additional costs not only during acquisition but also in daily operation and of course make the systems more susceptible to errors. On the other hand, halls and facilities are usually densely filled with a lot of other equipment such as gas-water-compressed air lines, cable trays, light fixtures, radiators, ventilation ducts, crane runways and much more.
IMEX Filtertechnik has been using 3D scanning very successfully for many years to meet such challenges of finding real "hidden paths" for pipelines. By using this unique technology, we can carry out a millimetre-precise survey of the conditions in a hall and digitally record and map existing objects exactly. This means that the 3D planning of the pipe system not only allows for the best and most efficient performance paths, but also for an analysis of overlaps (collision detection).

„As part of our project with IMEX Filtertechnik, the IMEX team also made a 3D scan for planning purposes. We were pleasantly surprised by the detailed picture. Using special software, we were given the opportunity to see even the smallest details virtually, but above all to be able to measure the dimensions of containers, pipes, equipment, etc.!
We asked for such a 3D scan for the next project, which had complex demands on the use of space at height. Areas that are difficult to access can be conveniently measured on the PC.“
Dr. Miroslava Rill, Site Engineering, Site Security Manager

In the last more than 10 years the IMEX Filtertechnika experts in Sopron have successfully planned and implemented numerous projects, including international ones. The cross-border cooperation and know-how transfer within the IMEX Filtertechnika Group enables it to use this unique 3D scanning and 3D pipe system design service also in Austria.